The crazies over at the American Family Association regularly send me their hysterically funny newsletters, always full of money-begging and fear-mongering.  More often than not the back page will be an ad for some family value voters summit, plastered with photos of Rush Limbaugh, Ann Coulter, Sean Hannity, etc.  I sometimes forget this is coming from a religious organization and not the RNC.

Last year AFA wanted me to boycott McDonald’s because the company refused to end it’s association with the National Gay and Lesbian Chamber of Commerce.  They sent me a cute little prewritten sticky note that I was to take to my local McDonald’s and stick on the money used to pay for my last McDonald’s meal.  The note would inform the Manager that until McDonald’s stopped siding with moral corruption and became neutral in the “culture war” I simply could not in good conscience spend my hard-earned Christian dollars at the restaurant.  Hilarious, right?  Hilarious, odd, and scary, all swirled into one nightmarish little Neapolitan mix. 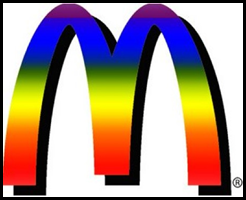 Needless to say, I never dropped off the note at McDonald’s.  And the boycott was a total and complete bust, as McDonald’s stock went up nearly every single day that the boycott was active.  Lots of gays drinking lots of iced coffees, yes, yes we did. 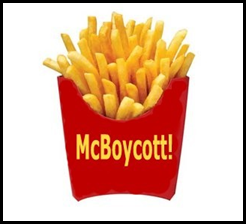 Jump to my latest mailing from AFA.  GAP INC. IS EVIL!  THEY WON’T SAY “CHRISTMAS” EXCLUSIVELY!  Basically, I’m supposed to boycott all Gap Inc. stores (Banana Republic, Old Navy, Gap, etc.) until after Christmas the Holidays because they’re supposedly censoring “Christmas”.  Unfortunately for the nonexistent credibility of the American Family Association, Gap actually has an ad out now that very obviously says “Christmas” loud and clear:

If you think I’m kidding, just click on the video and let it take you to the YouTube page and take a look at the comments.  Here are a few of the crazies:

“More secular paganism to sell more﻿ cheap Chinese crap. The boycott will expand to any company who denies Christ.”

“This is supposed to appease those of﻿ us who are boycotting Gap, Old Navy and Banana Republic. Just more moral and cultural relativism. Boycott not over.”

“Merry Christmas Gap, may you have no better sales than﻿ any other time of year…let’s go to Macy’s who has respect for tradition and values. Throw it all to the wind right? Why believe anything when its all "relative" to what "feels right" to whomever no matter what drugs they are on? ur ok im ok!”

“This is stupid. Do whatever feels right they say. I will not shop there. That feels right. First they refuse to use Christmas﻿ in their advertising now they throw it in with Solstice. Disrespectful! I will spend my Christmas dollars elsewhere. Merry Christmas!”

Those few comments are just from the selection made in the last hour, truly terrifying.

Now for the GAP win aspect of this post.  It was just announced today that the profits of Gap Inc. were up 25% in the last quarter.  The timing of AFA’s silly boycott could not have been better.

Now my fair-minded, non-crazy friends, I encourage you to pick up a few extra GAP gift cards this year for your friends and family.  I know these AFA folk probably don’t normally shop at GAP anyway, but I think that regardless it couldn’t hurt for us to support GAP’s spirit of inclusiveness.