When I talked about the awful situation in Russia in my post a couple of weeks ago, barely anyone was covering the story. I’m glad to see that now has changed, and it’s getting much wider coverage. Still no movement in Russia, but at least the word is out there.

I am sad to report however that news is coming in that indicates the young man whose photo I used in my previous post has died from injuries he sustained while being tortured by the homophobic mob pictured. 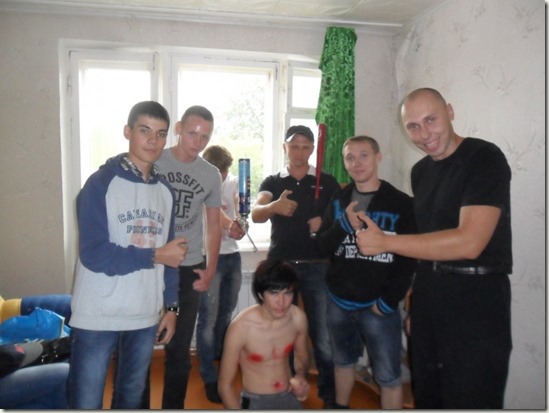 According to human rights activist Dr. Valentin Degtyarev, MD, who has been reporting on the “Occupy Pedofilyaj” group, after being tortured and humiliated, the man was beaten with bats and apparently had some sort of liquid foam injected into his body. Dr. Degtyarev reports that no charges have been filed and no arrests have been made.

He also stated that after notifying the authorities of the crimes being committed he was told they could see no wrongdoing in any photos or videos posted by the group and that they consider the group to be one of the local “civil movements fighting the sins of the society.”

These monsters make no attempt to disguise their identities in any of their photos or videos. They feel protected by Russia’s recent laws to criminalize homosexuality. Even telling a child that gay people exist is now a crime.

Above is a video I pulled from one of the group member’s social networking pages before it was take down. It shows the beginning of the incident after fooling the victim into showing up at what was supposed to be another gay man’s home.

I do not know what else to say. I am hoping the information is inaccurate, but fear it likely is not. As more information becomes available I will share it. In the meantime please spread the word and sign this petition: https://www.allout.org/en/actions/russia-attacks